The Mount Saint Joseph Lacrosse team has had a history of previous players in its coaching staff. Many of the coaches that have come through the Mount to give back to the boys have been in the same shoes as the players. They attended the same classes and had some of the same teachers, notably Mr. Jeffrey who graduated from the Mount himself in 1974. The most recent Varsity head coach, Stephen Berger, was a Mount Graduate of 2000 who spent four years coaching at MSJ.

The new varsity coach, Phillip Bates, has been coaching lacrosse for a while. He was the head coach for two years at Dallastown Area High School in PA. His overall record at the school was 29-8, and in his first year, he led his team to the York-Adams League Title. 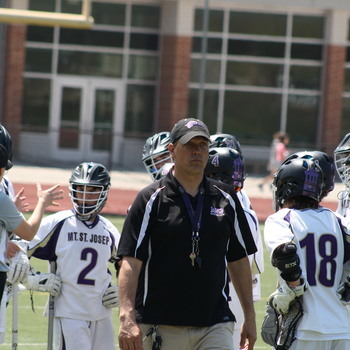 Coach Bates on the sidelines during a home JV game – Photo Credit https://bit.ly/2O1W130

Coach Bates, Coach Stephen Jeffrey, and Senior player Cole Baker all had lots to say about the upcoming season, and their thoughts on the coaching change at the top of the lacrosse program.

One thing is certain, everyone I spoke with were all very excited to see what Coach Bates will be able to bring to the table, especially the additions to the coaching staff that he was able to bring in — a new Face-off Coach, Luther Fleming, and a head JV coach, Omar Dupree. The new additions will bring out the best in the position that they will oversee. Cole Baker remarked, “face-offs are a big part of the game and in the past, we have not had a coach dedicated solely to the position. Our face-off specialist, Cole Trippet, will be able to get the attention he needs to do the best in his position.” One place where the team did not expand vastly was the defensive staff. Coming back to support the program is Coach Jeffrey.

Coach Stephen Jeffrey played lacrosse while a student at MSJ. He then attended Randolph Macon College and returned to MSJ to teach. He also began coaching football and lacrosse. He has been able to work with most of the coaches in the lacrosse program in recent years and has been able to work with Coach Bates personally.  He could only say positive things about him. “He’s a great coach and I’ve been with him for a few years and he has the coaching ability and the contacts to make it work at MSJ. He wants to be here and he loves it here and has what it takes. I know he’s excited, he knows what is expected, and it should be interesting.” With Coach Jeffrey coming back, the defense will be able to perform to the best possible outcome with the help of other coaches like Patrick Paine and Stephen Mersinger.

He’s a great coach and I’ve been with him for a few years and he has the coaching ability and the contacts to make it work at MSJ. He wants to be here and he loves it here and has what it takes. I know he’s excited, he knows what is expected, and it should be interesting. – Coach Steve Jeffrey on new head coach, Phillip Bates

The team is looking forward to the upcoming season, and one of the things that coach Bates brings to the table is his passion. He believes it is the thing that makes him a stand out coach from others. “It is what drives me, I am very passionate about the sport and as a high school player, the number one thing that my coach told me that I could do would be to give back to the game.”

Coaching is what Coach Bates lives for. He has been across the US coaching and playing the game he knows and loves. He a great addition in the coaching staff and the sky is the limit for him. Speaking with current players, it is obvious that Coach Bates cares about the entire organization, and the MSJ community is excited to see what he will be able to do in the spring of 2019.

Jake Schwarzmann is a senior and a member of the Multimedia Journalism class. Follow Jake at @shazman_19 on Instagram

View all posts by Jake Schwarzmann