The SAT: Do we really need it?

The SAT, originally called the Scholastic Aptitude Test, and later called the Scholastic Assessment Test, is something that is dreaded by almost all high school students as they approach their junior year. It is a requirement for most colleges, although there are some schools that no longer necessitate it. Cornell, George Washington College, and Salisbury University are a few but they are definitely outnumbered by the colleges that require some sort of standardized test. This particular test makes students worry and stress for months, and it may not even be worth it. “Some of the material in the SAT is stuff that I hadn’t even learned before,” said Christian Avara, a senior at the Mount who has already taken the SAT. “I was nervous going into it, because I knew I had to do well to get into the colleges I wanted to.” I guess the big question is, do SAT’s even reflect how good of a student someone is?

The SAT is a simple concept: a two-part test comprised of a math section and a language arts section. It is designed to test one’s knowledge and reasoning, and give colleges something to judge potential candidates on. However, research has recently indicated that this is far from the best way to gauge a student’s academic ability.  One study found that SAT scores increase dramatically with every additional $20,000 in family income (Mic Network Inc). This implies that this test leans less heavily on intelligence and more on availability. In other words, this means that someone that comes from a family that doesn’t make a lot of money, has an unfair disadvantage. 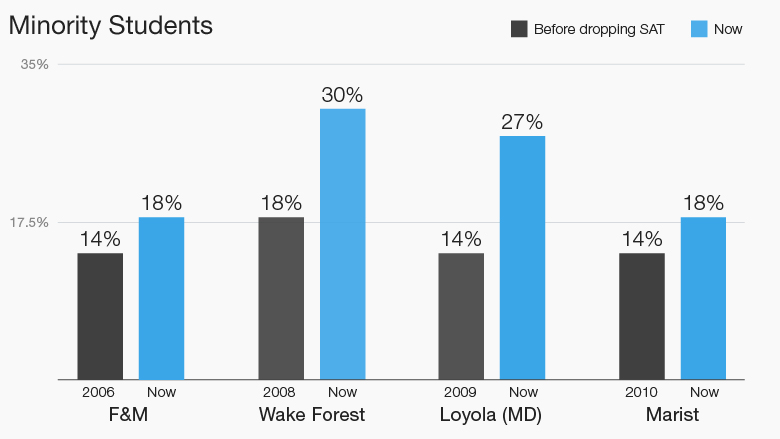 Graph showing the percentage of minority students being accepted into schools before and after the dropping of the SAT. Photo from: CNNMoney, Katie Lobosco

The SAT costs $52.50 to take this year, not an insurmountable sum by itself, in truth, but families with a higher income can pay for prep classes, practice tests, and other opportunities that less wealthy families might not have access to. “I took prep classes before taking the SAT, and they really helped me out. They taught me strategies and techniques to maximize my time while taking the test,” Avara stated. When asked if he thinks he would have done as well without the prep classes, he added, “without a doubt. I would not have done nearly as well if I hadn’t taken those classes.”

Another argument for omitting the standardized test scores is that they do not accurately predict how successful an applicant will be in college. Thomas Rochon, a contributor to U.S News & World Report, wrote, “…the loss of test score information at the time of admission makes very little difference in our ability to identify how successful applicants will later become as college students.” His study had been looking at schools that omitted the test scores, and seeing if they could accurately predict the level of success of the applicants in college. To their surprise, they found that they could predict this almost as well as those schools that chose to include the SAT scores.

What ought to be the role of standardized testing in the college process?

Mr. Rochon also mentioned in his article that some students refrain from applying to a college that they want because of the required SAT score. Some brilliant students have trouble taking standardized tests, and this portrays their abilities inaccurately. Rochon says that the SAT is a tool rather than the end itself. “There is substantial evidence, though, that test scores for some applicants conceal more than they reveal. And when the requirement of submitting test scores deters some potentially strong students from even applying, then it is time to take a fresh look at the tool.”

Speaking as a high school junior, I am not looking forward to taking the SAT. The amount of work that is required to perform well on it, is very stressful for people like me. “I find it difficult to do my regular schoolwork sometimes,” says Nick DeLauro, a fellow junior at Mount Saint Joseph, “I spend a lot of time studying for the SAT, and this makes my schoolwork suffer. I would have much more time to do my everyday homework if I did not have to study for a single test.” Personally, I do not think that the SAT exam will show colleges what I can do, or what I am really capable of. I know what I am able to accomplish, and I don’t think a test should override my own expectations of myself.

Ben McElroy is a junior and a member of the Multimedia Journalism class.

View all posts by Ben McElroy